A Book Review of Sarah Palin's: "America by Heart: Reflections on Family, Faith and Flag" 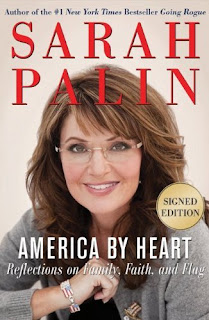 Sarah Palin – love her or hate her – has just released her new book entitled, “Reflections on Family, Faith and Flag”. In this book, we get to see a little more of what makes Sarah tick. What is funny is that as I was looking at the Amazon.com reviews of Sarah’s new book, I was amazed at how many progressive and libs went on and posted negative comments and reviews. LOL! No true conservative after reading this book could ever leave these kinds of negative statements. People are entitled to their own opinions, but more than that was at work here. In these negative comments and baseless slanders of Sarah’s new book – which these individuals most likely did not even read – reveals to all just how successful Sarah truly is today. That is why we conservatives love her and why the Left totally hates and fears her. Sarah is a rising force in America today and the Left, and Moderates are scared to death of her.
"I was amazed at how many progressive and libs went on and posted negative comments and reviews"
Sarah today is much like Deborah of the Book of Judges (Judges 4, 5). In the days when Israel was oppressed by their enemies, their own godless vices and environmental Baal worship, the people cried out to the Lord for deliverance. Godly men and leadership were missing at this time and God rose up the woman Deborah to judge and deliver Israel. It is from Deborah's great leadership – under Almighty God- that Israel’s enemies were destroyed and Israel enjoyed rest for 40 years.
As TRUE American’s today have cried out to Almighty God for help – just as our Founding Fathers did- to restore our nation to a place in which it would turn from its gross wickedness and secular lawless bent, it would seem in Almighty God's grace and mercy that He has heard our prayers. Sarah is the right woman at the right time. I know that this statement is too much for a lot of people to handle but it is what it is. 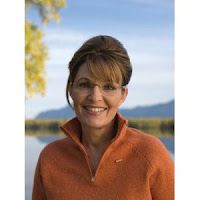 The other day I downloaded Sarah’s new book, “Reflections on Family, Faith and Flag” on my iPod. As I began to listen, I personally loved the personal touch in which Sarah herself narrates this book. One of the things that I greatly enjoyed about this book is that Sarah shares and echos my personal beliefs of America and that she is not intimidated to speak of the very ideals that made America great! This book will fire up the conservative American and that individual will be nodding “that’s right!” all thought her book.
"She is not intimidated to speak of the very ideals that made America great!"
Sarah’s “Reaganess” qualities have been quite refreshing these last couple of years and a great encouragement to TRUE Americans everywhere. We have lack genuine conservative leadership in America for some time and Sarah has seemed to fill this void. As the American apostate movement (progressive secular left) seeks to overturn and replace our Judeo/Christian culture, morality, Constitution, and God given liberties, Sarah has been a voice for millions who seek to preserve our nation and to keep it the way it was founded. Sarah's book will totally fire up all those who genuinely love TRUE freedom, TRUE liberty, the American dream and its Founding ideals.
In this book, she quotes and speaks about great U.S. and world statesmen like George Washington, John Adams, Thomas Jefferson, Abraham Lincoln, Ronald Reagan, Margaret Thatcher, Booker T. Washington, Calvin Coolidge, Abigail Adams etc. She speaks of our nation’s founding and our Founding Father’s vision for America. She speaks - with great pride - about our military men and women and how we are all indebted to them. She speaks about the Tea Party movement and the Tea Party American individuals who have let their voices be heard this last year. She speaks about TRUE feminism and against the evils of the perverted and twisted secular feminist movement of the godless left. She speaks about her love for her family and how they have been a great inspiration and blessing to her. She gives insight into some of her trials and how she was able to overcome them. She speaks about the slanderous and vicious attacks of the Secular leftist media on her and her family and how she was and is able to cope with these haters. She defines for us the term “mama grizzly” and she boldly talks about the failing family unit in America today, morality, abortion, God and the harmful social and cultural effects of secular socialism.

One repeating word that Sarah continued to mention through out her book was that of her “faith”. In her last book, she spoke in a little more detail about her relationship to Almighty God, but this time around it seemed more generalized and not fundamental as the Bible teaches. From a fundamentalism Christian’s point of view, it was troubling that she DID NOT ONCE mention the Name which is above all names, the Lord Jesus Christ at all in her book (Phil. 2:9-11, Rev. 19:14-15). If one professes a saving faith in Jesus Christ, one would expect to hear the Saviors name at least mentioned once. Perhaps she was instructed not to do so for fear of the media’s response to it. If she is indeed seeking to remain in the political spotlight and run for President in 2012, the acknowledgement of the Name of Jesus Christ could come back to haunt her in her run and derail her candidacy (Mark 8:38). It is a know fact that the majority of Americans are fearful of the fundamentalist position of the Bible and their position on the Name of the Lord Jesus Christ. Anyone seeking to be elected into public office today would NOT get the vote of these majority of these Americans.
As a Bible believing fundamentalist Christian, the Name of Jesus is mentioned and spoken quite freely and frequently by me, even more than my country and family. For the reality is, that Jesus saved me from my sins and delivered me from the wrath to come (Gal. 1:4, 1 Thess. 1:10). How can I leave Him out of any book and any topic (1 Cor. 2:2, Gal. 2:20-21, 6:14)?


"From a fundamentalist Christian’s point of view, it was troubling that she DID NOT ONCE mention the Name which is above all names, the Lord Jesus Christ at all in her book"
.
It would seem from Sarah’s book that Sarah has either a pluralistic view of the sound biblical teachings of salvation (Rom. 3:23, 5:1, 6:23,10:2-4) - which is contrary to that which is taught in the Holy Bible - (John 4:24, 14:6, Acts 4:12) or that she purposely choose to leave the Name and Person of the Lord Jesus Christ out of her book and put Him on the back burner to prevent any hindrance for her future political aspirations. Whatever the case, Sarah went with the relativistic and less offencive word s “faith” and “God” rather than coming right out and professing Christ as her Lord (1 Sam. 2:30b, Matt 10:33).
"We give this read a 4 Star review!"
Over all, this entire book was most excellent and a must read for all true conservative Americans and all Americans who seek to know what made and how to make America great . Sarah’s excitement about America and our Founding Father’s vision is very contagious and fires up the true American spirit of freedom and liberty which were endowed to us from our Creator. We loved this book and give this read a 4 out of 5 Stars review!

.
The Kingdom of Heaven is at hand!
DJP I.F.

A Review of Sarah Palin’s New Book: “Going Rogue, An American Life”
What is Driving the Left's Hatred of Sarah Palin?
Sarah Palin Shares Her Faith in Almighty God - Video