Commentary on The Pledge of Allegiance by Red Skelton 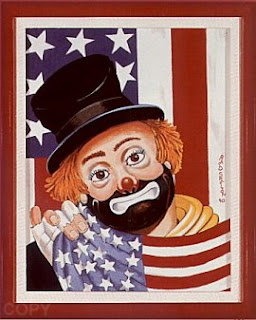 A a schoolboy, one of Red Skelton’s teachers explained the words and meaning of the Pledge of Allegiance to his class. Skelton later wrote down, and eventually recorded, his recollection of this lecture. The last sentence was a prophecy of what would happen decades later. From the Red Skelton Hour January 14, 1969

You Tube link of Red Skelton's Pledge of Allegiance

I: Me, an individual, a committee of one.

Pledge: Dedicate all of my worldly goods to give without self-pity.

Allegiance: My love and my devotion.

To the Flag: Our standard; Old Glory ; a symbol of Freedom; wherever she waves there is respect, because your loyalty has given her a dignity that shouts, Freedom is everybody's job.

United: That means that we have all come together.

For which it stands

One Nation: One Nation - meaning, so blessed by God.

Indivisible: Incapable of being divided.

With Liberty: Which is Freedom; the right of power to live one's own life, without threats, fear, or some sort of retaliation.

And Justice: The principle, or qualities, of dealing fairly with others.

I pledge allegiance to the Flag of the United States of America, and to the Republic, for which it stands; one nation, indivisible, with liberty and justice for all. Since I was a small boy, two states have been added to our country, and two words have been added to the Pledge of Allegiance: Under God.

Wouldn't it be a pity if someone said that it's a prayer, and it would be eliminated from schools, too? --Red Skelton

The Ignorant Fishermen at 7:33 AM No comments:
‹
›
Home
View web version