Happy Holidays in Place Of Christmas 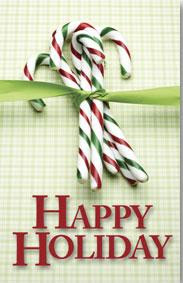 We hear it so often around this time of year: "Happy Holiday!" "Season’s Greeting!" Everyone seems to be in the mood for some kind of festive celebration.

Exactly what is the holiday that we are celebrating? Are we allowed to say it? Is it a forbidden word? Are we afraid to say it? Will people be offended if we actually tell them what the holiday is?

What ever happened to the birth of the Saviour? Should it even be mentioned? Was it a significant event? Has it been a giant mistake that all of our calendars mark His birth as the starting point, and that His birth divides all of this world’s history into B.C. (before Christ) and A.D. (anno Domini, in the year of the Lord)?

In the past we were concerned about the secularization of the Christmas holiday and we urged people to keep Christ in Christmas. Now it seems we have even lost Christmas! Look at the decorations people put up on their lawns: blown up snowmen, beautifully lighted reindeer that sometime move back and forth, Santa Claus in all kinds of shapes and sizes, etc. If an alien from outer space were to visit earth at this season of the year and look at the holiday preparations and decorations, would he have any idea what Christmas is all about? (Not that I am a believer in alien visitations).

We observe a holiday at the beginning of every year and people don’t seem to be ashamed of it. They say, "Happy New Year!" They don’t say, "Happy Holiday!" They understand exactly what the holiday is all about and they have no problem celebrating the coming of a new year. Why are we embarrassed to celebrate the coming of the Saviour into the world? "This is a faithful saying and worthy of all acceptation that Christ Jesus came into the world to save sinners" (1 Timothy 1:15).
.

If an alien from outer space were to visit earth at this season of the year and look at the holiday preparations and decorations, would he have any idea what Christmas is all about?

One might object: "If we make too much of Christmas we might offend our Jewish friends and we might offend the Muslims and we might offend the atheists." When our Jewish friends celebrate Hanukkah, for example, they are celebrating their deliverance from a brutal tyrant, King Antiochus Epiphanes, in 164 B.C. They have every right to celebrate this remarkable event and the courage of Judah the Maccabee and other heroes of that day. Indeed, most of the Jewish holy days (Passover, Day of Atonement, etc.) have their basis in the Bible and are highly instructive.

Muslims observe their holy days and are neither ashamed of them nor embarrassed by them. In our country they have a right to do so, and that right should be respected (even though in Muslim countries where religious freedom is unheard of, such rights are rarely if ever given to Christians). Do not Christians have a right to celebrate the birth of the Saviour, the time when God became a man? Or should we only do so secretly, behind closed doors, without anyone finding out what it is or WHO IT IS we are celebrating?

Atheists don’t have any holidays to celebrate their unbelief. There is little motivation to hold festivities in honor of a world view in which man finds himself in the middle of a universe governed by blind chance, having evolved as a freak accident of nature, facing a future without any rhyme, reason, or purpose, and headed for a death that ends all.

Should we give up Christmas and abandon it as a holy day? After all, no one wants to mention it anymore, and it seems to have evolved into a meaningless, festive, gift-giving occasion apart from any spiritual significance.

I don’t know about you, but as for me, I refuse to give it up. If the God of the entire universe, the Maker of heaven and earth, decided to pay a visit to this earth, then that event is highly significant and worthy of at least a yearly remembrance and thankful celebration. "And we have seen and do testify that the Father sent the Son to be the Saviour of the world" (1 John 4:14).

Here is the Christmas story according to John, a man who knew Jesus Christ very well: "In the beginning was the Word, and the Word was with God, and the Word was God. The same was in the beginning with God. All things were made by Him; and without Him was not any thing made that was made...And the Word was made (became) flesh and dwelt among us" (John 1:1-3,14).
John also makes very clear the reason God came to earth as Man. He came on a saving mission: "For God so loved the world, that he gave his only begotten Son, that whosoever believeth in him should not perish, but have everlasting life. For God sent not his Son into the world to condemn the world; but that the world through Him might be saved" (John 3:16-17).

Why was the incarnation so important? Why did God have to become a man? In order to save sinful men, God would have to die for sinful men. But God cannot die. Therefore God would have to become a man in order to be able to save mankind. This was made possible through the miracle of the virgin birth. Although God could not die, the God-Man (the Lord Jesus Christ) could die and did die for our sins: "All we like sheep have gone astray; we have turned every one to his own way; and the LORD hath laid on Him (the Messiah) the iniquity of us all" (Isaiah 53:6). "But God commendeth his love toward us, in that, while we were yet sinners, Christ died for us" (Romans 5:8). 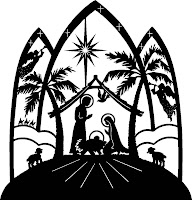 On that first Christmas night, the angel announced the good news which summarizes the true meaning of Christmas: "And the angel said unto them, Fear not: for, behold, I bring you good tidings of great joy, which shall be to all people. For unto you is born this day in the city of David a Saviour, which is Christ the Lord" (Luke 2:10-11). If it really is good news for all people, why should we be ashamed of it? The Saviour’s entrance into this world should be shouted from the housetops!

The Saviour has been born! He died as the sinner’s Substitute and He rose again to provide eternal life for all who believe in Him. Do you know Him as your personal Saviour? "But as many as received Him, to them gave He power to become the sons of God, even to them that believe on His name" (John 1:12). Jesus said, "Him that cometh to Me I will I will in no wise cast out" (John 6:35).

"But these [things] are written, that ye might believe that Jesus is the Christ, the Son of God; and that believing ye might have LIFE through His Name" (John 20:31).