Global Warming/ Climate Change - The Bible Has The Answer 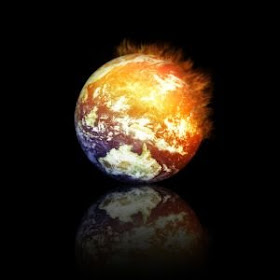 Almost overnight, the concept of man-made global warming has become an accepted fact. Debate on this issue is rarely tolerated and millions of people are fearful that man’s activities are leading to a gradual global catastrophe. Cries to reduce auto emissions, burn less fossil fuels and shrink our carbon footprint have made people uncertain what the future holds for planet earth.

The Bible however, speaks quite clearly of God’s sovereign control over the earth’s climate. Jesus said, “That ye may be the children of your Father which is in heaven: for he maketh his sun to rise on the evil and on the good, and sendeth rain on the just and on the unjust” (Matthew 5:45) God promised Noah, “While the earth remaineth, seedtime and harvest, and cold and heat, and summer and winter, and day and night shall not cease” (Genesis 8:22) This pattern of cyclical seasons has been faithfully kept by God since the Genesis Flood.

But the phrase, “while the earth remaineth,” warns of a future day spoken of by the Apostle Peter : “But the heavens and the earth, which are now, by the same word are kept in store, reserved unto fire against the day of judgment and perdition of ungodly men” (2 Peter 3:7) Peter was simply echoing the Old Testament Psalmist who wrote, “Of old hast thou laid the foundation of the earth: and the heavens are the work of thy hands. They shall perish, but thou shall endure: yea, all of them shall wax old like a garment; as a vesture shalt thou change them, and they shall be changed: But thou art the same, and thy years shall have no end” (Psalm 102:25-27).

Peter further warned, “The day of the Lord will come as a thief in the night; in the which the heavens shall pass away with a great noise, and the elements shall melt with fervent heat, the earth also and the works that are therein shall be burned up” (2 Peter 3:10) While this will certainly be global warming, it will neither be gradual nor the result of auto emissions.

What then is the reason for God’s coming judgment? While He walked the earth the Lord Jesus Christ never warned of the effects of environmental pollution but rather of the inward pollution of a person’s heart. “For out of the heart proceed evil thoughts, murders, adulteries, fornications, thefts, false witness, blasphemies” (Matthew 15:19) The Lord’s mission was clearly stated by the Apostle Paul when he wrote in the book of Galatians, Jesus Christ “gave himself for our sins, that he might deliver us from this present evil world, according to the will of God our Father” (Galations 1:4)

The Bible declares Jesus Christ is both Creator and Redeemer. “He was in the world, and the world was made by him, and the world knew him not. He came unto his own, and his own received him not. But as many as received him, to them gave he power to become the sons of God, even to them that believe on his name” (John 1:10-12)

Yes, Christ’s work when He shed His blood on Calvary ’s Cross can save a sinner from God’s righteous judgment. And if the Lord will save those who trust Him from an immoral and bankrupt heart, how much more shall He save them from the wrath to come? Won’t you trust Him today?

For, “if thou shalt confess with thy mouth the Lord Jesus, and shalt believe in thine heart that God hath raised him from the dead, thou shalt be saved” (Romans 10:9)

The Ignorant Fishermen at 4:30 AM