The False Gods of America 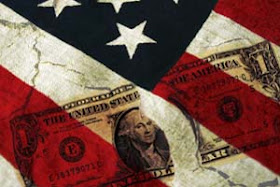 Today in American’s today are slaves to material possessions, covetousness, greed and the evil desires of their fallen unbridled passions. Sadly, the inhabitants of this nation seek to find their purpose, joy and fulfillment in these temporal things in which to feed their ETERNAL soul’s famished  appetite. Material goods or possessions can NEVER bring full satisfaction and completion to the heart of fallen man (Eccl. 1-2, Matt. 16:26). There is absolutely nothing evil or sinful about having material blessings and enjoying them to the fullest. As a matter of fact, it is what God loves to do for the nation and people that follow His natural and moral absolutes (Eccl. 2:24, 3:13). Our founding fathers fully comprehended this truth and sought this for their posterity for centuries to come. They gave a stern warning to their posterity NOT to forsake the Laws of Nature and of Nature’s God, but to be a nation totally sold out to virtue, morality and the fear of Almighty God (Prov 1:7). Oh my fellow American, how far have we fallen from our founder's vision. Our founders gave us the Bill of Rights and a Constitution to insulate us from the rise of power hunger tyrants, lawless men, despises of Almighty God and to keep us from succumbing to the base practices of our unbridled passions.
John Adams stated,

"We have no government armed with power capable of contending with human passions unbridled by morality and religion (Biblical Christianity). Avarice, ambition, revenge, or gallantry, would break the strongest cords of our Constitution as a whale goes through a net. Our Constitution was made only for a moral and religious (Christian) people. It is wholly inadequate to the government of any other."

"A Constitution of Government once changed from Freedom, can never be restored. Liberty, once lost, is lost forever." 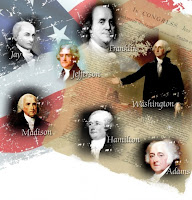 Today, we as a nation have forsaken our founder’s warnings and mandates and have replaced and sought hard after a godless, decadent and lawless system. We have corrupted ourselves as a nation and have reaped the whirlwind, socially and fiscally. The Bill of Rights has become the Bill of “my self-centered lawless” Rights. The First Amendment of “freedom of speech” has become the lawless right of “do or say as thou wilt” regardless to how vile or decadent! 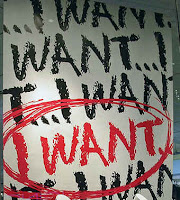 The key in all of this is to NEVER allow our worldly possessions to possess us (Psalm 49:17, Eccl. 5:5, Matt. 6:19-20, Luke, 12:15; 15:21, 1 Tim. 6:7). Beloved, NEVER allow anything or anyone to replace Almighty God and His will for your life. Sadly, we as Americans have become as spoiled selfish children today. No matter what social class one may find themselves in, we as a nation believe it is our God given right to have anything and everything that our sinful heart desires, for... we are Americans and we deserve it.


Beloved, NEVER allow anything or anyone to replace Almighty God and His will for your life.
The question to ask ourselves is this, if Almighty God takes all of our worldly possessions away (as Job had), that we may be drawn closer to Him and bring much fruit for His glory, will it be well with our soul? Today, believers are much distracted in seeking temporal worldly fiscal security while placing our heavenly calling in the closet (Rev. 3:15-20). Woe unto us if we preach NOT the Gospel of Jesus Christ in these last hours before the Day of the Lord arrives (1 Cor. 9:16)! For indeed we must be fully redeeming the time and hours, knowing what our Savior’s will is for our lives (Eph. 5:16-17).
Scoffers of Those Who Warn 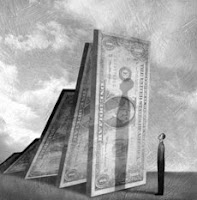 Our nation's decadent philosophy is the ever singing chorus of, "eat drink and be merry for tomorrow we die" (Eccl. 8:15, Isa. 22:13)! This narcissistic suicidal and callous mindset has increased our lawless bent and our nation’s moral and fiscal condition to dire and critical.
Implosion 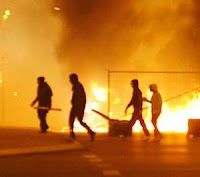 Even today our lazy, spoiled, lawless and uncountable U.S. victicrats citizens (red, yellow, black or white), oh, excuse me… the “poor”, eat the best foods, wear the best cloths, have free medical, dental and housing, have their countless bastard children taken care of mostly all for FREE! These expenses are footed by the ever over burdened American tax payer. These slaves to lawlessness and the state are kept on the social plantation and are ruled by the Left in this country, but once our money is gone and the dollar collapsed, what will be then when these have their social addictions not met? Only violence, discord and anarchy will follow! The inner cities will be violent jungles where only lawlessness will abound.
The middle class -  in their desperation - will delve to levels that they thought unimaginable. In the need to survive they will also become violent and exceedingly desperate.
Sadly the lawless rich will get richer and have the power and will rule as the elite class much like the Nazi’s and  Soviets etc. did. Is this not the vision of those here in America on the Left have for themselves as they ever lead this nation into the darken regions of national socialistic and elite rule?
.
Treasures in Heaven 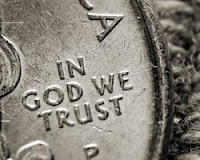 What will be, cannot be stopped. All things are driving us to the time called in God’s Word, the Day of the Lord!
What came easy for us in these last day , will go just as fast. What is crucial for all of us to see is that we need to see the ETERNAL and not get caught up in the passing temporal (1 John 2:15-17).
The Lord Jesus stated,
"But seek ye first the , and his righteousness; and all these things shall be added unto you" (Matt. 6:33)
"But lay up for yourselves treasures in heaven, where neither moth nor rust doth corrupt, and where thieves do not break through nor steal" (Matt. 6:20)
"But as it is written, Eye hath not seen, nor ear heard, neither have entered into the heart of man, the things which God hath prepared for them that love him." (1 Cor. 2:9)
As we are on the brink of a new day here in America, one full of adversity, violence, lack, want and despair, there is One who NEVER changes (Heb. 13:8). There is One who wants ALL to come to a saving knowledge of Him for their ETERNAL betterment (John 3:16-17). Do you personally know the Lord Jesus as your Savior? If not, be sure that you do today. That is what this vain little life is all about. He has come to make us RIGHTEOUSLY rich with an ETERNAL inheritance (Eph. 1:7, 14). May you place your trust in Him today! You will NEVER be the same!
The is at hand!
DJP I.F.
What is Sin?
Gospel of John Challenge
.

The Ignorant Fishermen at 12:25 AM