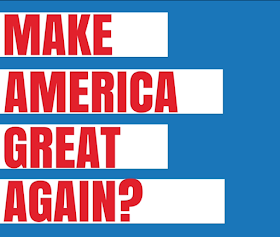 What I find absolutely amazing today is how many Americans truly believe that one person can "make America great again" after years of our nation's war on and abandonment of moral absolutes. As many Americans know, "Make America Great Again" is Donald Trump's presidential campaign slogan. This campaign slogan sounds great and has given a huge false hope to many Americans who want to return back to America's "less declining" pre-Obama years. However, I truly wonder how many of these Americans see the REALITY and three dimensional perspective of how impossible, unrecoverable and irreversible the fallout and damage inflicted on America's people, nation, fiscal estate, social estate and society truly has been since 2008. The absolute key ingredient which is stealthily missing from Mr. Trump's, "Make America Great Again" slogan is that He and the current New Republican Party have eliminate and removed ALL social conservatism from their platform, which is based on the moral absolutes of Almighty God; the Creator of the heavens and the earth (Gen. 1:1, John 1:1-3, Rom. 1:18-32, Heb. 1:1-3). Remove all MORAL ABSOLUTES as we have as a nation and deceptively campaign on the future rejecting and eliminating of these crucial moral absolutes to "Make America Great Again" and what do you think will be left of our nation? Observe this simple equation. Lawlessness... plus lawlessness... equal more lawlessness, full blown anarchy and national implosion! History is full of such examples so what would make America any different? Can you see it? It is just that simple my dear friends. To "Make America Great Again" you need to restore moral absolutes into the equation and in our day of full blown moral relativism, pluralism and lawlessness what do you think the chances are of that happening?


The absolutely key ingredient missing from Mr. Trump's, "Make America Great Again" slogan is that He and the current New Republican Party have eliminate and removed ALL social conservatism, which is based on the moral absolutes of Almighty God; the Creator of the heavens and the earth.

My friends and fellow Americans, please hear me and humble your hearts. We are at the end of America's shining light on a hill as our two present presidential candidates have fully displayed for all clueless and sober Americans to see. Today's Americans have been so dumbed-down by years of incremental and subtle deception by lawless and godless legions that they actually believe that our nation, the "doomed sinking Titanic" is actually still UN-sinkable. Years of generational dumb downing has highly influenced and reduced our nation's sound judgment on the simplest of moral truths. Dear friends, these are the very unpopular and sobering HORRIFIC REALITIES of our day, like it or not (John 3:19-21). Do not hate us or like minded individuals for giving you the true diagnoses of nation's present estate but by objective consideration have an ear to hear it.


Today's Americans have been so dumbed-down by years of incremental and subtle deception by lawless and godless legions that they actually believe that our nation, the "doomed sinking Titanic" is actually still UN-sinkable. Years and generational dumb downing has highly influenced our nation's judgment on the simplest of truths.

My dear friends, how can any society survive when moral ABSOLUTES are scoffed at and demonized by both political parties? The answer is, “It will not!” Thus, we now see the sad state and coming downfall of our once great and highly respected nation. Many Americans are placing ALL their trust in the wrong ideal and are feeding the fire for the demise of our nation, as prophetically predicted by our Founding Fathers. America and the world's ONLY hope at the end of this age is found ONLY in Jesus Christ the Savior of the World! Dear friend, do you truly know Him as the Holy Scriptures TRULY and SIMPLY teaches?


Tragically, it will be this complete abandonment of social morals that will be America's final demise.

Tragically, it will be this complete abandonment of social morals that will be America's final demise and my dear friend we are all ready there! This nation - due to her abandonment of moral absolutes and the soon coming Rapture of the body of Christ - will finally implode on herself, thus opening the door to the entrance of the Four Horsemen and the dreaded Day of the Lord (Rev. 6-19). My dear friends, it is absolutely crucial for all individuals to be sure that they personally know the Savior of this doomed and fallen world (John 1:12, 3:16-17, 1 John 5:10-13). This world is headed into the final showdown between lawlessness and RIGHTEOUSNESS. Between Lucifer the fallen angelic creature and the ETERNAL GOD and CREATOR of ALL that is in the heavens and the earth (Rev. 16:13-16). My dear friend, do not turn your back on ETERNAL TRUTH, RIGHTEOUSNESS and PARDON for vanity, lawlessness and ETERNAL perdition. Humble yourself and choose biblically and wisely! For my dear friends, the Kingdom of Heaven is TRULY at hand!

The 28 Principles of Liberty

The Ignorant Fishermen at 12:00 AM