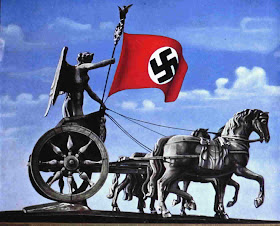 On November 11, 1941, just as the German army was poised just outside the gates of Moscow, Adolf Hitler hubristically announced that the coming new Aryan world order would be a green one, “but there is one thing I can predict to eaters of meat, that the world of the future will be vegetarian!” Here, Hitler goes far beyond the idea of individual taste and preference. On this particular evening, while Army Group Center was engaged in an all out battle on the frostbitten Russian front, Hitler contemplates an eco-fascist vegan goal demanded of all as one of the major fruits of victory. Shockingly, both he and Himmler actually had plans to make the new greater Germany vegan after the war. Himmler himself had even recently begun to fancy organic farming. He was planning on feeding his SS troops with a hearty, organic diet perfectly suitable to those who were to be closest to nature to keep them strong and healthy. The harsh realities of the Russian Front, however, required that such Nazi goals would have to be shelved until after the war. Such a totalitarian green agenda and the fighting of a war of almost apocalyptic proportions was simply too much to bear all at once. Indeed, just a few months later, after the Wehrmacht had suffered a catastrophic, icy defeat in the battle of Moscow, Hitler felt compelled to reassure Navy Admiral Fricke that he would not forbid the consumption of meat and that vegetarianism was not a cardinal doctrine of National Socialism. He then went on to give him a lecture on the merits of vegetarianism and how much cattle pastures take away land that could otherwise be used for growing vegetables.
.
"In other words, surprisingly enough, Hitler’s trumpeted 1,000 year millennial Reich was going to painted green along with the so-called brown"
.
In other words, surprisingly enough, Hitler’s trumpeted 1,000 year millennial Reich was going to painted green along with the so-called brown. Indeed, with so much newly acquired lands captured in the East, the grand dream of a ‘local only’ sustainable economy, untainted and cleansed from the exploitation of international Jewish commercial markets, will become a reality. Indeed, Poland will become Germany’s green Ireland, and the Russian-Ukrainian steppe will be re-afforested and converted into many large frontier farms for the SS to enjoy in vast, natural, park-like surroundings. In 1941, Hitler predicted that, “in 300 years, the country will be one of the loveliest gardens in the world!” Indeed, Nazi landscape planners were impatiently chomping at the bit to move in behind German lines to start drawing up environmental plans for the newly acquired eastern territories.
. 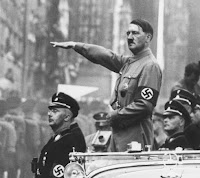 Hitler was convinced that Germany itself was overpopulated, over-industrialized, and running out of space and food, all of which was destroying the biological substance of the German people. It was therefore high time to push East in order to resolve this existential biological-environmental crisis. Worse is that since the laws of Nature demanded the survival of the fittest species, this meant that the Jews and Slavs would have to go by the wayside in a massive displacement and de-population program. In December of 1941, when the battle of Moscow was in full swing, Hitler even commented,” if I can accept a divine commandment, it is this one: Thou shalt preserve the species.” Racial species like the Aryans must be protected from extinction just as much as any animal, and a green, vegetarian diet was going to play a future role in this natural process, “as regards the animals, the dog, who is carnivorous, cannot compare in performance with the horse, which is vegetarian. In the same way, the lion shows sign of fatigue after covering only two or three kilometers, while the camel marches for six and seven days before his tongue even begins to hang out.” Such were the detailed observations of the Fuhrer during the height of war.
.
"Not surprisingly, vegetarians and environmentalists have largely downplayed the historical record of Nazi Germany’s green streak"
.
.Not surprisingly, vegetarians and environmentalists have largely downplayed the historical record of Nazi Germany’s green streak. Some have been quick to point out that Hitler apparently cheated on occasion with ham, sausage, and seafood dishes. Hitler was also inconsistent with regard to environmental preservationist values and practices, largely because of the need to place Germany on an all out war footing throughout the 1930’s in a vast economy busting arms buildup. Hitler was also a fond of grand building projects National Socialism style and was planning on exploiting the natural resources in the East as much as possible to win the war. However, with great interest indeed, Hitler attributed his vegetarianism to the famous German opera composer Richard Wagner who provided the musical background to the Nazis. Why, one might ask? Because Wagner preached a racist socialism based on vegetarianism that would cleanse Germany from the Jews. Wagner was a revolutionary anti-Semite who hated the Jews for commercializing art. 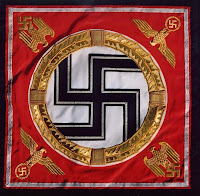 The Nazis were thus hell bent in ushering a new apocalyptic world order based on the literal application of Nature’s Social Darwinian laws to social and political life. Hence, just like Marxism, which envisaged a secular eschaton of socialistic utopia at the end of history based on the literal socio-economic conditions on the ground, so the Nazis countered them with the much heralded 1,000 year Reich based on literal biology and ecology, which Himmler’s SS especially took to heart with their “Blood and Soil” doctrine. German blood and German soil were principles that were presumed to be according to Nature’s Social Darwinian laws of life that must be adhered to if Nazi Germany was to enjoy the eschaton. While the Marxists, however, viewed the eschaton as more open ended, the Nazis seized upon the 1,000 year Reich as the perfect counterfeit to the whole idea of the 1,000 year Judeo-Christian Millennium predicted in the book of Revelation. Both the Marxists and the Nazis thus extracted from the Judeo-Christian worldview its apocalyptic view of history, yet discarded its sacred and supernatural framework for the latest political and social-scientific-evolutionary fads of the times. In short, whereas the Marxists believed that the eschaton would be realized through the socio-economic dialectical conflict between the capitalists and the proletariat, the Nazis believed that the Aryan Millenium would come about through the application of proper biological eugenics into the fray of Nature’s ecological battles and struggles. Contrary to popular opinion, the Master Race was the best precisely because it was most in tune with the laws of Nature.
.
"Adolf Hitler is thus one of the most outstanding modern forerunners of the Antichrist yet to date"
.

Lastly, the Antichrist will demand that the entire world worship him or face death. Hitler, of course, was a big proponent of the Fuhrer principle. He once told his undersecretary Martin Bormann that he will one day become a religious figure. He went on to say, “already Arabs and Moroccans are mingling my name with their prayers. Amongst the Tartars I shall become Khan. The only thing of which I shall be incapable is to share the sheik’s mutton with them. I’m a vegetarian, and they must spare me their meat!”
.
The Kingdom of Heaven is at hand!
RMM I.F.
.
'Green' Islam?
.
Lucifer's Abomination of Desolation - The Global Worship of Himself and His Anti-Christ
.
The Gospel of John Challenge
.
What is Sin?
Mark Musser was a missionary to the former Soviet Union for 7 years. He is now a pastor. Mark is the author of two books – “Nazi Oaks: The Green Sacrificial Offering of the Judeo-Christian Worldview in the Holocaust” and “Wrath or Rest: Saints in the Hands of Angry God.”
All of the quotes from Adolf Hitler are taken from the book entitled “Hitler’s Table Talk: 1941-44” and the infamous “Mein Kampf.”
The quotes from Arthur Schopenhauer are taken from the unabridged version of "Parerga and Paralipomena."

The Ignorant Fishermen at 5:07 AM